Anything can be justified. 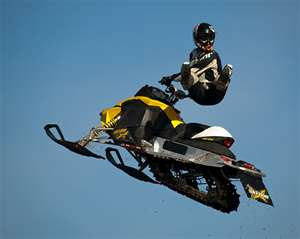 My husband decided to borrow money from his mother to buy TWO NEW snowmobiles. One for him, and one for our first son Connor. It was mainly because theirs both had "issues" last year and it would be a much better experience for them if this year they had new ones. So, since Dave's s mother seemed to have $15K lying around, he decided to use it. Now, not for nothing, but there are MANY things in the house that need some attention, that even a portion of that $15K could have been used for (fixing garage doors, painting, new carpet, etc). But, as usual, it wasn't hard for Dave to justify using the money for the new snowmobiles instead of anything else. One thing to remember though, I have 2 sons. And only 1 has gotten a new $8K snowmobile gift. If I were my other son (whose birthday is coming up in October) I would have asked where my $7K gift is. After all, isn't that only fair? One kid got one, shouldn't the other? Good thing my #2 son is more like me and only asked for a new snowboard for his birthday! But you get the point.

And then there is the working around the house thing. Last Saturday, since I had to be in the announcers booth for the Gaels home football games from 8:30-3pm I had asked my men to do one job each. Dave needed to clean the hottub (it was way overdue)  and the kids needed to clean their rooms. I, thank god, had a night out ( for once).

As I returned home that night, I was hit once again with a dirty kitchen, laundry on the bathroom floor, and SURPRISE SURPRISE; hottub NOT cleaned (he took a nap instead) and neither of the kids rooms cleaned. Seemed that it was a very lazy saturday night at my house ( Oh, and don't forget they ordered out instead of cooking too). I asked why they didn't do what I had asked, I got the usual...We forgot....So, the kids had to clean their rooms sunday, but Dave had tickets to a NASCAR race, so he was up and out of the house by 6am.  And since we wasn't going to be home til after dark, cleaning the hottub had just been added to my list of things to do.

I have to wonder sometimes how men would survive only living with other men. They certainly would be broke (paying for ordering out all the time) and I can't imagine what condition their living arrangements would be in. Laundry certainly wouldn't get done, nor would any type of home improvement. But I bet they would all have really nice cars, and lots of fun mechanical toys to use! No wonder why so many younger men go back to live with their mothers!

I keep forgetting that everything men do is always about them. Any attempt made to look like or seem like its not is really just an illusion. I should know better after all this time.
Posted by Mariah Hunt at 10:38 AM