The Tasmanian Devil lives at my house! 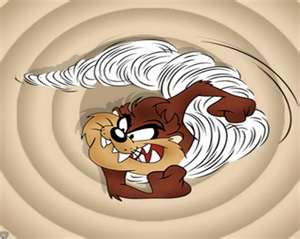 I kid you not. My son Wesley is the Tasmanian devil...Everywhere he goes, everything he touches, he leaves a huge mess in his wake. Even standing still he can make a mess.

His room looks like a tornado hit it ( more than once) clothes everywhere, empty soda bottles on the shelves, garbage overflowing. I am tempted to leave it all, but then I can't imagine what kind of "critters" would decide to come feast in my home.

Connor is not so bad, but he exhibits the same similarities as Wesley. His room has the bottles, the laundry on the floor and the garbage overflowing. Why anyone can't think to empty the garbage pails is beyond me.

I had started literally following Wesley around picking up after him, but that got old very quickly. Now its going out privileges taken away if their rooms are not clean, laundry not put away and garbage pails not dumped. It works much better, and stops me from having to run around constantly.

Today however was a first even for Wesley. I got a brand new large capacity front loading, stainless steel LG washer and dryer delivered to the house THE DAY BEFORE. I had already done 5 loads with them and there were no incidents. One load of Wesley's jeans ( with a whole pack of chewing gum in the pocket) almost brought down both appliances. ONE DAY! The washer is fine, the dryer I needed to clean off with a Clorox wipe or two to get the dried on stains off ( The gum of course was the very red 5 fruit flavor kind with Shaun Whites name on it). It took me the better part of an hour to get it all off the sides, the inside of the drum, and the front glass.

Even if it still was under warranty, what do I say to Home Depot? ...Well, the Tasmanian Devil got to it of course!

Girls have got to be at least cleaner and neater...Don't they?
Posted by Mariah Hunt at 7:40 PM No comments:

Beware the word "WE"

"We" used to be such a great word. It signaled collaboration, togetherness, pairings, working side by side,  a spirit of 2 (or more).

Today, in my testosterone jungle, it really just means "me" in disguise. I know better than to use the word "we" in my house. I am very careful to use either I or me. Why? Because "we" has turned upside down and become "Me". My kids seem to know better. They use I or you. They very rarely use the word "we". There is hope for them yet!

My husband however is a different story.  I get statements like;  "we" have to... When he really just means that "I" have to. Me, not we, not him, just me. I try to turn this around on him all the time. I would say "we" need to clean the leaves up in the yard ( knowing full well that I am not out to do it.) Or, simple things like "we" need to get the oil changed in the cars, or "we" need to drop off the garbage. All the while really meaning that "he" needs to do it.

I am very sly sometimes too. I will even go so far as to start helping him with a job "we" start it,  and let him finish...A way to motivate him to start and finish the job. Otherwise, left up to him, he wouldn't have started it, or finished it. So I guess that is "we" at least in the beginning.

Something I knew all along, now there is "research" behind it. 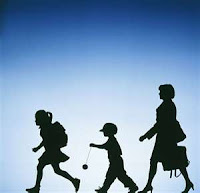 http://www.boston.com/community/moms/articles/2011/12/13/working_mothers_outdoing_fathers_in_multitasking_at_home_study_finds/?p1=News_links
Posted by Mariah Hunt at 9:18 AM No comments:

When the tupperware spouts legs! 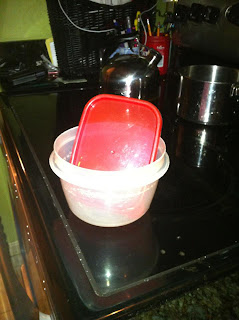 I've mentioned it before, but I am stuck on this- Why can't men finish anything? They unload the dishwasher, and I have to put the "last" of the things away. Mainly the tupperware sitting on the counter that will need to spout legs to crawl to the cabinets if I don't do it. Or, the leaves that are now sitting along the back fence, that need to be blown to the front to be picked up (you know that won't happen anytime soon) Those leaves are going to be there cone spring. So, we will have to burn them so they are out of the way of the fence gate so we can mow the lawn. You want to guess when that will happen? My guess is after the snow flies!

And then there is the laundry. They take their laundry into their rooms, but it NEVER gets puts away. My husband keeps his on the floor at the end of the bed, Connor will keep his on his papasan chair, Wesley will put his on the floor of his room. Doesn't ANYONE feel the need to put this stuff away? Apparently not!

So, lets move on to the garage. The NEW snowmobiles and my mother in laws stuff is on the left side, my car has room to go in on the right side (that was after a great battle with my husband on which car was actually going in the garage).  I was moving things around the other day ( so if they fell, they would not scratch my NEW car) and found some interesting things my husband didn't even realized we had there. His ski pants for one (why they were in the garage I have no idea) Or the 5 ( yes 5) coolers we have sitting on the ledge of the garage. At least 3 of them were broken, and I asked if I could throw them away and got the ultimate answer "Why are you going through stuff in the garage?" "Well", I said, I am trying to de-clutter so that I can avoid having things fall and scratch my NEW car." I should have said, "I am moving the junk to the other side so it can sit on top of your new snowmobile" that would have gotten his attention! And probably sonme things moved to the trash. But, as it was, I had to put it in the "throw away" pile.

And now on to actually doing some work at home. It's like pulling teeth to get ANY of them to do work at the house. My husband actually said to me "I don't have to" when I asked him what work he was planning to do at the house on a particular weekend. WHAT?? How did that happen? Do you live here too? Living here requires that ALL people in the house help- Not just me. That has been a very tough lesson to teach to any of these guys. I figures, like the tupperware, if I leave things where they put them, it might get clutter4ed enough at a later date for them to put stuff away (all the way away).

I think I am going top try a new tactic...If you were supposed to put it away and did not, it stays where it is.  PERIOD. In fact, I am going to take pictures of the counters daily to see how long it stays there. Stay tuned...
Posted by Mariah Hunt at 3:46 PM No comments: