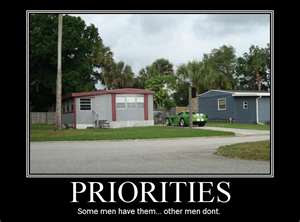 In the never ending struggle of defining priorities between men and women, I always find it odd how far apart we are when it comes to what is important. In my house, the priorities of my 3 men are (in no particular order) Sports, TV, cars. You notice that NONE of these have anything to do with their living situation (like cleaning their rooms or picking up after themselves) Or making sure there is enough food, drinks and snacks in the house. Here's another example;

After rushing to do grocery shopping this weekend ( because I had to work at a conference Sunday afternoon) I was informed that I forgot to buy some items we had run out of.  My response? If we were out of them and you knew it, why didn't you stop off and pick them up? ) After all, my husband had jury duty this week and was home earlier than "normal" for the last 4 days.

I mentioned that he could always pick these things up ( especially since he wasn't as busy as he normally is due to jury duty) and I got the " you have 5 heads" look. It was a "deer in the headlights" moment. One he wasn't going to get out of (at least not this time) and then ...silence.

It's usually easier to tell me we are out of items than to take it upon yourself to pick up these things up.  I supposed if it were motor oil, car filters, and some other outdoor/vehicle item I would never be asked to pick them up, but everyday household items? Aren't those my responsibilities? Well, simple answer...NO!

To make it as clear as day, black and white, I decided the best thing to do was to write down all the things I had to do in the house and for the family as well as write down all the things my husband and sons had to do for the family. Care to guess which list was the biggest? Even written down, it wasn't registering-There was every excuse in the book why they couldn't get to the things on their list. Even the great quote from my husband "I don't have to do them". WHAT?? Well, I saw red, flames were coming our of my ears and nose, my hair was standing on its end....What do you mean you don't have to do them? I asked. His response "I am allowed to relax once in awhile too". Yes, yes, you are, once all the things we need done are done. Then my other comment; "Well, what if I decided not do anything either? How would that do? I don't think my husband had ever thought what would happen if that really was the case. But, reality speaking, I would never say anything like that , nor would not ever do NOTHING. Its just not in my DNA.

To his defense (I am sure you are noticing my sarcastic tone here) there were some ambiguous things on the list. Like getting rid of the paint cans that have been sitting outside on the ledge near the garage since July. We did rent a dumpster when we had some work on the house done, but you can't put paint in the dumpster- So, its been left where it was put-0utside on the ledge. My husbands excuse for not getting rid of them; "I don't know where I can dump them".  It will take him a few more weekends to get rid of the paint cans. My guess is that they will be covered with snow before they are tossed.

I am sure I am not the only one who wishes that menss priorities would at least sometimes include "family" chores, or even at the minimal, not use the phrase "WE need to do it" when you really mean "YOU have to do it".

All is a days work. Then some,  apparently.
Posted by Mariah Hunt at 8:22 AM